7 edition of My life and an era found in the catalog. 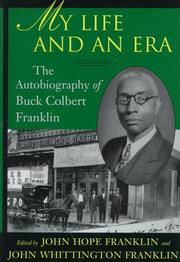 the autobiography of Buck Colbert Franklin

Janet and Jake Tashjian’s award-winning My Life series, praised by Kirkus Reviews as “a kinder, gentler Wimpy Kid with all the fun”, follows the coming-of-age misadventures of middle-grader Derek Fallon in school and through his attempts to follow his bliss as a cartoonist, video gamer, stuntboy, and ninja. Hilarious and uplifting, young readers will find themselves relating to Derek’s.   "My Unconventional Life" profiles individuals across the country who celebrate their nonconformity and proudly lead unorthodox lives. Check in weekly to Author: Hannah Kramer.